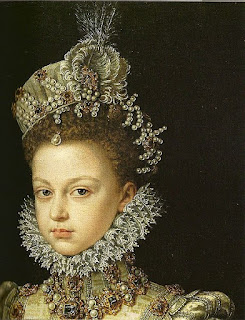 I’ve heard, but never participated, in the debate about what feathers would or would not be worn by the nobility and gentry. I’ve perused several blogs, pages, and pictures on Pinterest pointing out what would be desirable and likewise undesirable. One particular post has over 450 repins on Pinterest! However, I very respectfully disagree.  I don't usually debate, or comment negatively on someone else's research. But so many of my clients and fellow reenactors have used this one particular "pin" on Pinterest to qualify the opinion that ostrich feathers - especially those that were dyed - were not historically accurate. It is for that reason that I respectfully add my voice in dissent of this erroneous opinion. I contribute these types of "rumors" to one main factor - Mainly, that much of the information passed on by well-meaning reenactors has not been properly researched or documented, but rather they hear it from someone, who heard it from someone, and so on. But once its out there it takes on a life of its own! There are plenty of examples of this - namely to do with colors. Many reenactors STILL think that pink was not a color that was available in the 16th Century, or that royal purple was derived from seashells or sea slugs during the Tudor dynasty. Both are incorrect.  Half truths, but incorrect.

While studying from one of my newest books I acquired, “Rich Apparel - Clothing and Law in Henry VIII’s England” by Maria Hayward, I ran across  a specific section that mentions Ostrich feathers, which seems to shed some light on this topic and opens the floor to respectfully debate the accuracy of the claims made by the Pinterest author and thousands of reenactors who proliferate this belief. I mean no disrespect. Please hear that! Out of respect, I'm not including the pinterest picture in my blog.

In 1552, Edward VI, drafted a bill for the restraint of apparel - written in his own hand. He echos the statutes of apparel of his father (Henry VIII), but his draft was shorter, less detailed, and did not make any significant additions. However, Edward highlighted some small details of “NEW” items that were desirable - - and guess what it included?  Yes, that’s right! - - “Ostrich feathers.”

In this 1552 statute, Ostrich feathers, were “restricted to gentlemen and above.” The reference offered by the author is found in “The Literary Remains of King Edward VI,” written by J. G. Nichols, (1857-1964 New York: Franklin, II page 497).

To help sort out the social status of Gentlemen - - A “Gentleman” was a term that denoted a man of the lowest rank among the landed English gentry - which were untitled wealthy landowners, standing below an esquire and above a yeoman. An Esquire was the younger sons of the peerage, the male heirs of knights, esquires of the body, and officials such as judges, sheriffs, and officers of the royal household. A Yeoman, in this time period, was one step down from the landed gentry in social status, and were farmers who owned or rented the land and ran middle to large farms normally no less than 100 acres; many of whom were growing in wealth with an average income of £50-£100 per year.

In terms of social status in order of rank there was: Royalty, Nobility, then Knights, Esquires, Gentlemen, Yeoman, Husbandmen, Professionals, Merchants, with Day Laborers landing at the bottom of the social ladder.


"...Ostrich feathers were indeed a NEW and desirable commodity in 1552."

According to the references I’ve offered above, Ostrich feathers were indeed a NEW and desirable commodity in 1552.  However, Richard the III used ostrich feathers in his badges, as did other members of the royal family in the 14th and 15th centuries. The ostrich supplied feathers for medieval crests and 16th century fans, and their eggshells were turned into ornate cups. Ostriches are seen in medieval artwork in England as far back as the 12th Century.

Feathers are, together with palm and other big leaves, the oldest material used for fans. Big feathers like those from ostriches, or entire bird wings are “natural” fans. The Golden Season for feather fans in Europe started in the Renaissance era. From early 15th century to the end of the 17th century, feather fans were a fashion accessory of the European lady. Elizabeth I of England (1533-1603) had a special liking for fans. She declared that, “the only gift worthy a Queen are fans.”

The fact that the mention of Ostrich feathers are included in ANY sumptuary statute CAN, and MUST, be interpreted to mean that it was considered a sumptuous item - in other words, it was costly, and therefore subject to restrictions, and was not to be worn by the lower classes. Furthermore, the fact that they are mentioned in such restrictions at all means they WERE worn, and therefore, ARE historically accurate, despite the claims circulating on Pinterest and among the SCA, etc.

The argument is that “dyed” ostrich feathers were not historically accurate; however, in researching the history of Ostrich feathers it should be noted that in the 16th Century, Italy was renowned for coloring (dyeing) ostrich feathers into all fashionable colors (a tradition that became popular again only at the end of the 19th century). I also found a resource that states dyed ostrich feathers were a staple of the Medici family’s decoration in their coat of arms, which included a diamond ring and three colored ostrich feathers, signifying the three theological virtues, hope (green), faith (white), and charity (red).

Dying feathers is not so different than dying fabrics - in terms of the dye bath - so it would not be a stretch of ones imagination to find colored feathers being used in apparel during the 16th century - especially since, as I’ve stated, Italy was renowned for dying ostrich feathers, AND dyed feathers have been depicted in art dating back centuries - As I will show at the bottom on this post.

Dating back to the time of the Romans, including the 16th Century, Italy was one of the largest importers of goods from India, China, and other countries. Italy was usually the first to import new spices, cloth, and other consumable goods. England was not as quick to adopt new modes of apparel, but England imported a wealth of goods from Italy. Since Italy was renowned for dying ostrich feathers - assuming that’s where England  imported from - then I think it is safe to conclude that wearing colored ostrich feathers, or ostrich feathers of any kind, would indeed be something that the nobility and the gentry would (and did) wear.

The following are just a sampling of portraits painted of royalty and nobility featuring ostrich plumes: 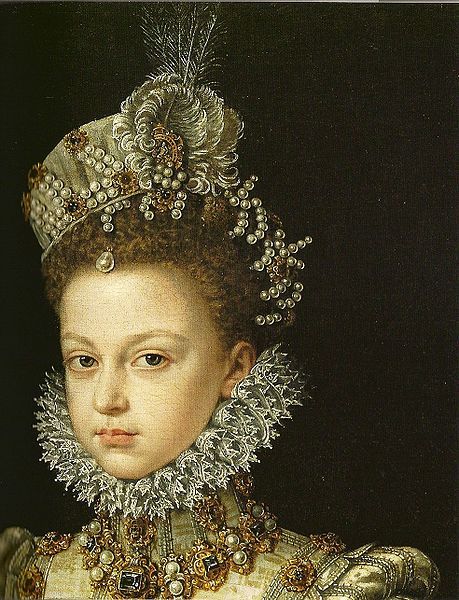 There are PLENTY of other portraits that show ostrich plumes. The following shows DYED plumes in his flatcap. The portrait below is of Charles IX, roi de France en 1563 (1550-1574). 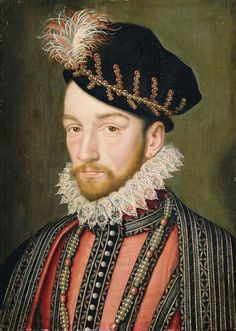 And just another sample of ostrich plumes seen in this famous portrait of what is believed to be of Helena Snackenborg, one of Queen Elizabeth's favorite Ladies. As you can see in this portrait she is wearing both a white and a BURGUNDY colored feather!! 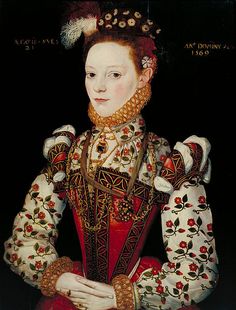 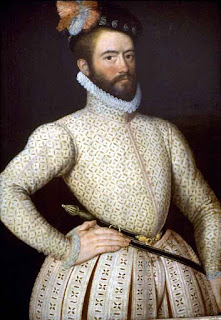 The following portrait in miniature was painted by François Clouet (1510 – 1572, French miniaturist and painter, known for his detailed portraits of the French ruling family.  Notice - - BLACK DYED OSTRICH FEATHERS! 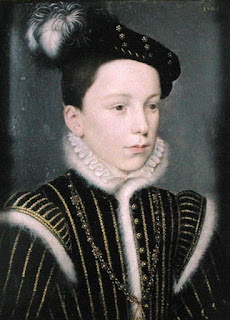 The Violin Player (below) painted in 1626 by Dutch artist Gerrit van Honthorst (B1592-D1656). Oil on canvas. While technically the 17th Century, this painting by this Dutch artist is further evidence that DYED ostrich plumes were used even within 23 years of Elizabeth 1st death. 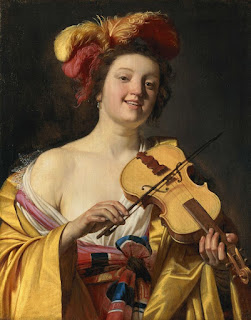 Taking into consideration that MANY portraits from the mid to late 16th Century depict women (and men) wearing ostrich feathers in their bonnets (as seen in the samples above), as well as the MENTION of ostrich feathers in the Sumptuary statutes during Edward VI's reign (which is definitive evidence that it was an expensive luxury item restricted to the upper class), I believe, therefore, we can conclude that ostrich feathers are/were indeed historically accurate for the Elizabethan time period - including those dyed in bright colors!

So DO wear dyed ostrich plumes in your 16th Century hats, and know that they ARE historically accurate.

Posted by Historical Costumes by Designs From Time at 12:26 PM

Historical Costumes by Designs From Time
Hello! I'm Christine! Designer and Proprietor of Designs From Time. I was bitten with the historical costume bug as a child, but did not pursue it professionally until my children were grown. My career in historical costuming "officially" began as a hobby when in 2001 I joined my first Renaissance reenactment guild in CA and began creating garb for family and friends. What first began as a hobby unfolded into a full-time career in 2012 when I was fortunate to retire early and relocate to the beautiful state of Washington, and further my technical skills at the New York Fashion Academy in Seattle. My mission as a designer is to offer the public quality, bespoke historical clothing and bridal gowns. My designs are unique, highly detailed Haute Couture, using authentic reproductions and Historical Embroidery reprouctions and original, hand-drafted Millinery patterns; exclusively available through my brand, and available nowhere else in the USA, Canada, or Europe. I began this blog to satisfy the many requests to offer tutorials to aspiring costumers and sempstresses who share in my passion for history and creating beautiful, wearable art - - - www.DesignsFromTime.com